#Vancouver ‘the Wet Coast.’ The joke goes like this…a tourist arrives in Vancouver on a rainy day. He gets up the next morning and it’s still raining. In fact, it’s still raining three days later. He goes out to supper and sees a young kid. Out of despair, he asks, “Hey kid, does it ever stop raining around here?” The kid says, “How do I know? I’m only six.”

Well the rain has finally come after a long dry summer that actually lead to water restrictions. Summer certainly went out with a bang in 2015. We got more rain in four days than the whole summer and to sum it up a bunch of trees came down knocking out power for days for vast areas in Metro Vancouver. Ah, it seems like only yesterday I was eating a well-deserved ice cream cone at Tickleberry’s in Okanagan Falls complaining about the 35 degree heat (I deserved it only because it was hot and for no other reason).

Growing up in a hot climate I try to comfort myself by calling Vancouver rain ‘liquid sunshine’, while my Father-in-law used to say “Vancouver is like a rain forest…warmer with lots of rain…if the climate wasn’t so mild we would move.” Vancouver gets lots of rain which we joke about all the time calling the west coast ‘the wet coast’ and so on. Delusional perhaps. I personally love the rain. Its fresh and gives us clean streets and green green grass.

Speaking of rain, last year my wife was walking down Robson Street in Vancouver, as you know Robson Street is a busy downtown street and known as the fashion district of Vancouver. Perhaps it was too crowded but she picked up on the conversation in front of her and relayed it to me later that night. It was clear to my wife from the conversation that one seemed to be a local Vancouverite, while the other a visitor. “You have to move your umbrella to the other side when walking past people, then back and forth as people walk by,” said the Vancouverite. “It must not be angled to avoid getting in someone’s eyes, and you need to move it up and down.” Like Mary Poppins, asked the visitor? “Yes,” said the Vancouverite. “It can be a challenge but it is proper umbrella etiquette for Vancouver!”The Vancouverite proceeded to show the visitor a well-choreographed umbrella dance that oddly managed to keep them both covered while being ever so mindful not to poke someone’s eye out or dislodge them from their path.The visitor looked a bit shocked like she was being scolded for not knowing this before…so did my wife, a 3rd generation Vancouverite herself, who has practically been genetically predisposed to tolerate vast amounts of rain. 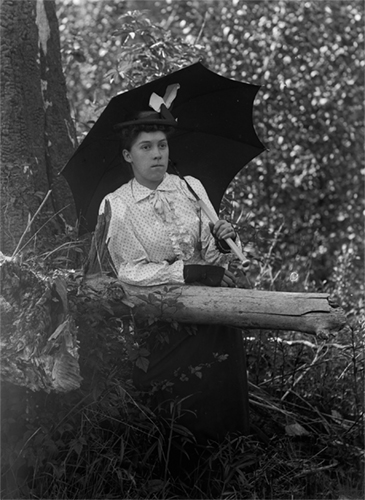 Perhaps it’s because she grew up in the burbs where the sidewalks are not so crowded that she has never heard about umbrella etiquette. Her ‘wet coast’ experience didn’t include umbrellas but rather wet socks from walking to school and being squeezed off the sidewalk by her brother and his best friend. They forced her to walk in the puddles all the way to school or face walking alone. She opted to be included (peer pressure can be nasty) over dry socks. You can image that since Vancouver gets 161 rainy days per year she spent the majority of the school year sitting in class with soaking wet socks.

Since overhearing the umbrella etiquette conversation on Robson St. my wife has become more than a little cognizant of umbrella etiquette especially since our umbrellas are oversized and bare our corporate logo. She started saying…”I’m a big believer in brand awareness but we don’t want our logo embedded in someone’s eye.”

Hard to believe that I had forgotten that conversation, but I had, until the big storm of 2015 hit. That is when the umbrella etiquette reminder came out of the closet along with the rain gear and winter coats. Pack the car kids!  We’re going to the PNE on the stormiest of the year! August 29, 2015! That’s when BC got more rain in four days than the whole summer! Personally it felt more like a huge wind storm than a rain storm but again maybe that’s because I’m just use to lots of rain.Take a look at the screen shot below of those few days. It shows the rain accumulation starting at the end of the month.

My family and I decided to take the PNE (Pacific Northwest Exhibition) up on their offer of free entrance into the fair mainly because the weather forecast called for a few hours of sunshine before the storm was predicted to make its grand entrance to Metro Vancouver. Ok it was mostly my idea…never one to turn down something free (I’ll pass the savings on to you). So we packed the car with our coats and umbrellas and off we went. Two oversized golf-like umbrellas and four people. Already the numbers didn’t line up and one of us was considerably taller than the rest. To make matters worse, it would appear that there are a lot of other fiscally aware Vancouverites out there and they all seemed to converge on the PNE at just the same moment that the gates were open for free which coincidentally was around the time the storm hit! I’m not sure if the looks we got from people were out of jealousy that we actually had umbrellas or if we were contributing to what New Yorkers call umbrella rage. I wanted to remind them of what Robert Louis Stevenson wrote in ‘The Philosophy of Umbrellas,’ “Umbrellas, like faces, acquire a certain sympathy with the individual who carries them.” We opted to take the umbrellas down rather than dodge, duck, and twirl our umbrellas around hundreds of PNE pedestrians. There would be no sympathy for the umbrella owner, just wet hair. 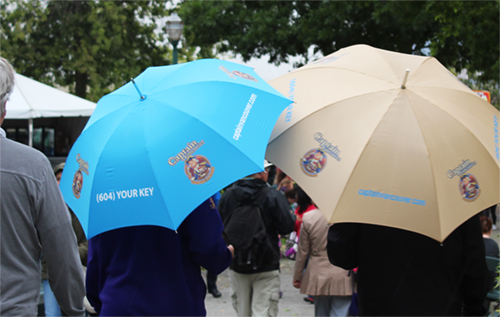 I admit I hadn’t a clue about umbrella etiquette and from what I did know it all seemed too much to orchestrate the thing around people, during a storm, while balancing PNE food – believe me it can’t be done! According to the ‘experts’…whom shall remain deliberately nameless, umbrellas expand our personal space and the room we take up on the sidewalk. Apparently most of umbrella etiquette revolves around this. For Vancouverites though who live with a lot of rain, I believe that umbrella etiquette is only half of the issue we face. There’s the cars that drive through water splashing pedestrians, and there are puddle pushers (those are the people who force you to walk through puddles so they can remain dry and comfortable) awning hogs…typically a two side by side set-up, most often they act unassuming and and deep in conversation, but we really know what they are doing, there’s the eye poker who is usually found in sidewalk sheds, and the worst offender…‘the umbrella dripper!’ An individual who will blatantly cart their umbrella around with them instead of using an umbrella stand lest it be stolen, while they drip water off the tips of the umbrella onto the floor so that some poor unsuspecting real estate agent (me) will have a slip and fall behind them! 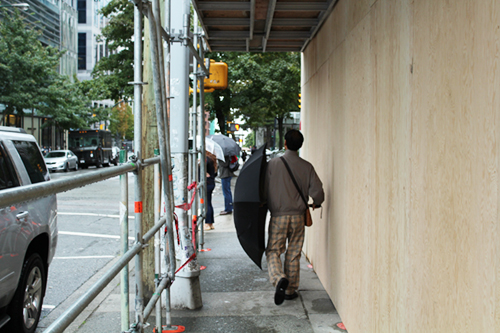 I could go on and on but instead of going through a list of umbrella rules, I’ve decided to take the lead on this one and create some pictorial infographics designed to help Vancouverites with umbrella etiquette and rain rage….which is coming soon so stay tuned and return here in a couple of weeks!

When we load up the pictorials you are free to copy, paste, distribute as you wish!